Self unloading bulk carriers originated in the Great Lakes. The Conveyor System was installed into the Lakers size bulk carriers to deliver to ports with limited or no bulk-handling facility. These vessels transported material between the ports of the St. Lawrence Seaway and the Great Lakes; thus serving as an inland extension to the major ocean routes from Canada. 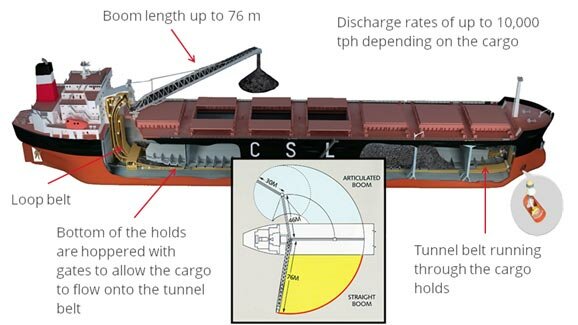 Fig: Self unloader how it works

Self-unloaders can operate and discharge cargo in any accessible waterway. They do not require shore-based discharge systems or additional infrastructure. Anywhere from 0 to 70 metres from quayside, self-unloaders can discharge directly into a hopper, a barge, a quay or a warehouse or store. Self-unloaders can provide offshore transhipment operations, topping up or offloading into larger vessels.

With a lack of bulk-handling facilities in many ports of the world this application was introduced into the deep-sea trades. This was done by strengthening the existing SUL Lakers, converting the ordinary bulk carriers of Handy and Panamax sizes, and recently building new state-of-the-art self-unloading bulk carriers.

Fig: Self unloader components in operation

The Conveyor System is the main distinguishing feature of the vessel. An essentially industrial type conveyor system and structure, designed for shipboard use, has given a specific identity to this type of bulk carrier generally called Self-Unloaders. In this design the ship holds terminate above the DB tank top forming a series of numerous open conical shapes called hoppers. These hopper openings are capped by hinged or sluice gates, which are operated hydraulically. 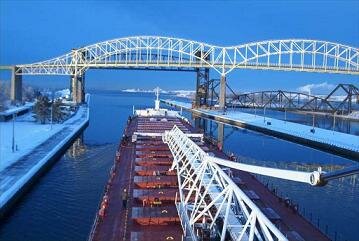 The void space formed between the underside of these hoppers and the DB tank top along the length of the ship is called the tunnel. The conveyor belt runs in the tunnel along the ships length, and is fed by cargo through the gates. Gravity is utilised and the flow of cargo is controlled; governed by the load on the belt. The cargo is then lifted up vertically (loop or elevator lifts) or by gradual inclines and is transferred to the ships boom.

The boom is an extended structure with freedom of direction situated on the main deck, and encases the boom belt, for conveying the cargo to the shore terminal.


The concept of "gravity free-flow"

The Concept of Gravity Free-Flow is utilising the weight of the solid bulk cargoes to slide down through the gates onto the hold conveyor belt. The conveyors work as mechanical extensions, which transport the cargo horizontally and vertically. Some cargoes do not flow as well as others; and the sloping sides of the cargo holds are lined with UHMW sheeting, to encourage cargo flow, however on occasion certain cargoes may require to be assisted normally.

The SUL Bulk Carriers are not dependent on bulk-handling infrastructure on shore. The ships boom conveyor is able to discharge cargo to the shore i.e. it is the final stage in the transfer of the cargo leaving the ship and it can be positioned to discharge the cargo in most positions to a quay, to the ground, hopper, barge or other ship etc.

The SUL Straight Boom has freedom of movement in three directions up to the ships beam, and the Articulated Boom also aft of the beam. Some modifications to the boom (Short Boom) can be made to make it more flexible in nature. The Shuttle Boom has its limitations, and is used mainly for hopper discharge.

Many self-unloaders operate with a mix of high-tech and simple gravity. The cargo falls through controlled hydraulic gates onto conveyor belts located beneath the holds. The belts carry the cargo toward the stern of the ship where its transferred to an elevating system and lifted toward deck level. Once there, it is released onto the discharge boom, which is slewed to either port or starboard - up to 65 metres from the side of the ship, and then is off-loaded to the shore, either directly onto a stockpile or into a receiving facility.

The Hybrid Self-unloading vessels discharge using a mechanism, mostly cranes. They lift the cargo and discharge into hoppers on the deck. A series of conveyors mounted on the deck carry the cargo to the discharge boom, where the cargo is ultimately discharged to a single point on shore.