Precautions against hazards of bulk cargo which may liquefy

Certain cargoes, such as concentrates and some coals, contain moisture that can cause the cargo to liquefy (for example, copper concentrates and certain grains including sago and tapioca can show the same characteristics as a liquid).

In a fine grained, moisture laden cargo the spaces between cargo grains are filled with both air and water. Whilst at sea the cargo is subject to forces due to the vibration and rolling of the vessel. These forces cause the inter-grain spaces to contract. The water in the spaces between grains is subject to a compressive force but as it is a liquid it cannot be compressed. This has the effect of reducing the inter-grain frictional force that holds the cargo in a solid state. Where enough moisture is present the reduction in inter-grain friction due to the ships motion and vibration can be sufficient to cause the cargo flow like a liquid i.e. to liquefy.

The most significant consequence for the vessel resulting from liquefaction is cargo shift leading to loss of stability. This may produce dangerous angles of list and in some instances the resulting loss of stability can be such that the vessel and the lives of those onboard are lost. It is therefore imperative that seafarers are aware of the types and condition of cargo that may give rise liquefaction.

The International Convention for the Safety of Life at Sea (SOLAS) Chapter VI  Carriage of Cargoes - provides the general framework for the carriage of all cargoes.

SOLAS Chapter VI Part B, Regulation 7 deals with the loading, unloading and stowage of bulk cargoes and introduces the Code of Practice for the Safe Loading and Unloading of Bulk Carriers (BLU Code). The BLU Code is included as a supplement of the IMSBC Code. The BLU Code, although primarily concerned with arrangements between the terminal and the ship to ensure safe and efficient cargo operations in port, does under section 3.3.3 state that: The terminal representative should be satisfied that the ship has been advised as early as possible of the information contained in the cargo declaration as required by chapter VI of SOLAS 1974 as amended. A question confirming that the cargo information has been received is also included in the recommended ship shore safety checklist at Appendix 3 - question 12 - of the BLU Code.

Terminal representatives bringing commercial pressure on masters to load their vessels before receiving the shippers cargo declaration are acting in contravention of the BLU Code and therefore SOLAS. Masters are urged to resist such pressures. It is a masters responsibility to ensure that the vessel is safely loaded; and where the shippers cargo declaration has not been received the master has no idea of the likely properties of the cargo to be loaded. If such declaration is not forthcoming a master should not commence loading and should immediately notify owners. Members should contact the Association for advice in such circumstances.

Hui Long, a bulk carrier which sank in 2005.
The cause was believed to be liquefaction,
possibly due to the TML being exceeded.
(Source:IMSBC code pocket guide)


The loading and carriage of cargoes that have the potential to liquefy takes place every day, all over the world and the vast majority of voyages pass off without incident. However, the potential consequences of loading a cargo that is unsuitable for carriage due to its moisture content are of such seriousness that vigilance when dealing with these cargoes can never be relaxed.

Familiarity with the IMSBC Code and an awareness that its Annexes are not exhaustive is important. Always bear in mind that some cargoes do not appear in the IMSBC Code and that these cargoes may liquefy. The best way to protect both the crew and the owners interests is by ensuring that the provisions and advice of the IMSBC Code are followed at all times and by being vigilant before, during and after loading.

There are reports of iron ore sinter feed (or sinter feed) shipments from Brazilian ports, including Ponta da Madeira, Tubarao and Itaguai, liquefying en route. Some Brazilian shippers declare sinter feed as a Group C cargo, under the IMSBC Code. This categorises the cargo as not being prone to liquefaction, so shippers do not have to provide test results for moisture content, Transportable Moisture Limit (TML) and Flow Moisture Point (FMP). 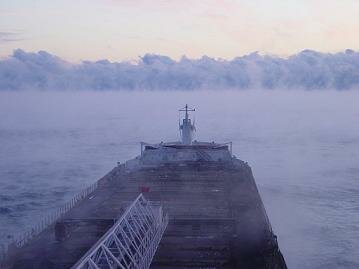 Sinter feed is clearly listed in the IMSBC Code as Iron Concentrate, under the schedule for Mineral Concentrates. All cargoes covered by this schedule are Group A cargoes and are prone to liquefaction.

Due to vibration and compaction of cargo within the ship, even apparently dry cargoes may liquefy into a semi-fluid state. A liquefied cargo can flow with the ship's roll but, when the ship rolls back, it does not completely return to its original stowage space. This may result in reduced stability and damage to the structure.

"Concentrates or other cargoes which may liquefy shall only be accepted for loading when the actual moisture content of the cargo is less than its transportable moisture limit. However, such concentrates and other cargoes may be accepted for loading even when their moisture content exceeds the above limit, provided that safety arrangements are to the satisfaction of the Administration..."

IMSBC Code Group A cargoes are susceptible to liquefaction during a voyage even if they are trimmed. Compaction of the cargo can reduce the space between the cargo particles and increase the water pressure. The water rises to the surface, at the same time reducing the friction between the particles and generating a free flow state. This free flow state does not develop if:

Mill Scale, a by product of hot rolled steel-making, is a bulk commodity liable to liquefaction, like iron ore fines. Mill Scale and Mill Scale Fines possess a transportable moisture limit (TML) and have thus been confirmed as Group A cargoes, which should not be accepted for loading without the shipper having certified the moisture content and TML. Due to the high density of the cargo, the IMSBC Code requires that it should be trimmed flat for the voyage, distributing the weight evenly over the tank top - wet base cargoes are prone to shifting, as the bottom liquefies and the top of the stow becomes free to slide over the base.

The recent tragic loss of the 2005-built Vietnamese bulk carrier and 22 of its crewship, which was reportedly carrying a cargo of nickel ore from Morowali, Indonesia to China, sank on 25 December 2010 underlines the urgent need for greater enforcement of regulations and testing of cargoes that may liquefy.

In December 2010, following the loss of three bulk carriers and 44 crewmembers in short succession, all owing to cargo liquefaction, the industry was reminded of the dangers associated with the carriage of hazardous cargoes, however, the recent loss demonstrates that the message has still not got through. Shippers and cargo interests have been called upon to conduct an urgent review into the testing and safety processes involved in shipping of hazardous cargoes following the spate of accidents and fatalities in 2010.

Some shipowners reportedly still do not have the relevant experience or knowledge in interpreting the IMSBC Code and are accepting cargoes, which are unsafe. The industry needs reassurances of the competent authorities in the exporting countries that their procedures and processes have integrity and transparency as they are the key to ensuring that seafarer's lives are not put in danger.

At the 16th Session of IMO's Sub-Committee on Dangerous Goods, Solid Cargoes and Containers (DSC) in September 2011, industry associations worked together to help strengthen and clarify the requirements of the IMSBC Code for accurate information relating to the carriage of cargoes that may liquefy, such as nickel ore.

The International Association of Dry Cargo Shipowners, INTERCARGO has issued a formal guidance document, which aims to guide and inform Shipowners, Masters and other industry stakeholders regarding the particular risks associated with carrying Nickel Ore. In response to the loss of four Bulk carrying vessels and 66 seafarers in little under 12 months INTERCARGO has sought to highlight the potential dangers of carrying Nickel Ore cargoes.

The guide gives practical advice to shippers, shipowners and charterers. The guide also points to other areas of assistance including from a vessel's P&I Club. The Club would like to remind Members of its own extensive information regarding the carriage of Group A cargoes and especially those regarding Nickel Ore in particular. (Source: UK |P&I |CLUB)


Problems of non-compliance with IMSBC code

In the wake of some tragic accidents occurring in the last quarter of 2010 in spite of the fact that the IMSBC Code containing measures to be adopted aimed at preventing the liquefying of bulk cargoes that affect the ship stability becoming mandatory, the concerns continue in the face of non-compliance by some shippers and ship operators.

The dangers that high-density liquefied bulk material poses on ship safety include increased structural load due to movement of the cargo and the rather dramatic effect on ship stability. Though the structural problem remains a serious issue requiring attention, the stability related issues also needs consideration.