Self unloading bulk carriers - How the system works?

Self-unloaders are specialized ships equipped with onboard cargo-handling systems, enabling them to discharge without shore-based unloading equipment. The self-unloading system works in three broad stages: 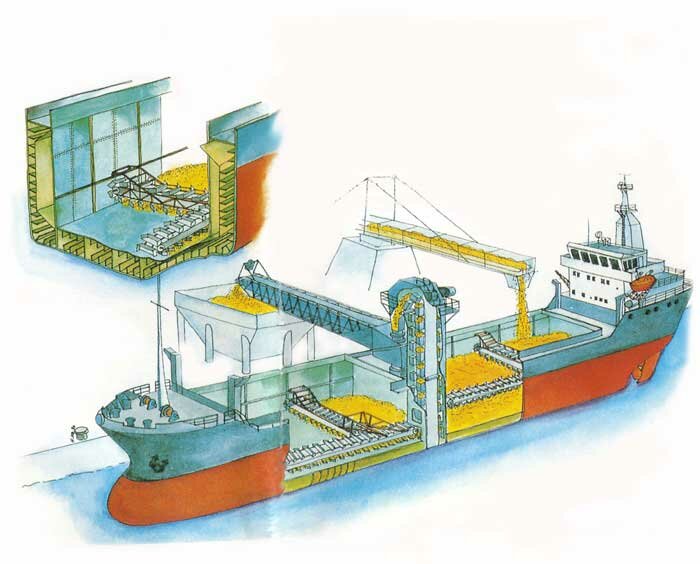 The design of the cargo holds facilitates the use of gravity. The bottom of the holds, form three kinds of two-dimensional triangular slopes. The triangular slope whose apex runs in a fore and aft direction, between the fore and aft transverse bulkheads continuously through all the holds is called the Saddle Back.

On a Two-Belt vessel there is one saddle-back along midships whereas on a Three-Belt vessel there are two saddle-backs equidistant from the ships sides. The Hopper-Side slope is the sloping side of the hopper-side tanks formed by the inner skin of the vessel. The third type of sloping shape is called the Hog Back. These are numerous small athwartships triangular slopes joining the saddle-back to the hopper sides. They are placed at equidistant intervals. The effect of all these triangular slopes joined in this manner is to form a series of hopper openings between every two hog-backs.

These hopper openings are controlled by gates, which can be hydraulically opened or shut to regulate the flow of cargoes out the tunnel conveyor. All the sloping sides in the cargo holds are lined with special UHMW sheeting to enhance the sliding (flow) ability of the bulk cargo being discharged.

The primary functions of the gates are:-
Bulk flow gate

These gates consist of two (opposing) moving sections which slide horizontally in the athwartship direction. Each section is fitted with two hydraulic cylinders, which are supplied from a central hydraulic power pack located in the engine-room.

Each gate is operated through a Teledyne valve mounted adjacent to the gate. When the Teledyne valve is operated hydraulic oil flows to all four cylinders via a flow divider. The flow divider ensures that both gate sections receive an equal amount of hydraulic oil and therefore move in equal amounts. This facilitates better control of the cargo flow. Bulk flow Gates are situated approximately 500mm above the trough of the tunnel, and therefore cargo falls this distance when the gate is opened.

The operator must exercise vigilance when unloading as certain types of cargo (e.g. Gypsum Rocks) may bounce off the belt and become trapped in the return strand of the belt. This can result in serious belt damage, as the rocks will jam between the carriage frames and the moving belt causing the belt to tear. The gates must be left cracked open before loading gypsum, if left fully closed, the gates will not open under hydraulic power alone. When there are flow problems with cargo in the holds it is customary to work this type of gate opening and closing, to loosen the cargo above. Operators must however bear in mind the fact that the gates are not to be worked too rapidly, as there is a possibility that the gates may come off their tracks resulting in damage to hydraulic cylinders and fittings.

This design of gate employs two hydraulic cylinders to operate each gate. The gates are constructed in one piece hinged at the forward end, and open in the fore and aft direction.

They are operated with a teledyne valve, but because the gate is in one piece there is no need for a hydraulic oil flow divider. The gates must be opened almost fully before cargo begins to flow, and this places the lip of the gate very close to the tunnel belt during unloading. Only one gate can therefore be operated on each tunnel at any one time, otherwise cargo coming down from an open gate further forward will be pushed off the tunnel belt and into the tunnel. This type of gate places cargo onto the belt as the cargo actually slides down the lip of the gate onto the tunnel belt.

These gates are similar in the design to the Basket Gates type, in that they are one piece gates which operate in the fore and aft direction. They are operated by a hydraulic cylinder, and are fitted with a rubber flap, and lengths of steel chain to prevent cargo from bouncing, as it falls from the cargo hold onto the tunnel belts.

This is a patented system, which, instead of having a series of individual gates over each belt, one N.C. Feeder is mounted per cargo hold over each belt. The N.C. Feeder consists of a set of stationary openings and a set of reciprocating openings which resemble a ladder. 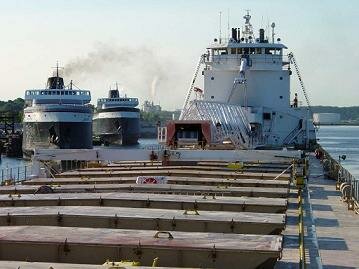 The reciprocation of the ladder is in the fore and aft plane. The ladder is powered by two large hydraulic rams. The advantages of the N.C.Feeder are that there is a reduction in the amount of hydraulic machinery required as there are only two hydraulic rams per cargo hold and the system is easy to automate. The flow rate from an N.C.Feeder is controlled by the speed of reciprocation of the ladder. The action of the reciprocating motion keeps the cargo above in a constant state of flux. This allows the N.C.Feeder to handle cargoes of a very sticky nature, which might result in problems with other types of gates.

The Hold conveyor belt or tunnel belt runs under the cargo holds i.e. under the gates. Two or three are fitted depending on the width or design of the vessel.

The direction of travel of the belts carrying side is determined by the location of the transfer belts which transfer the cargo to the lift belt/s. All belts are spliced to form endless loops, around the drive pulley at one end, and a tail pulley at the other. An electric motor powers the drive pulley coupled through a Fluidrive coupling, and a reduction gear box. . The tunnel belts are tensioned using a hydraulically operated tensioning carriage, which can be situated at the forward or aft end of the belts (depending upon the ship design).

Transfer belts are short athwartship running belts, which receive the cargo from the hold conveyor via the transfer hopper, and convey it to the lift belt via the centre hopper.

Usually there are two transfer belts from the two outer hold conveyors to the centre on either side. The transfer area is where the cargo changes direction, by being transferred from one belt to another via hoppers or bins. This is a high risk area as there is a concentration of drive elements. Protection to personnel provided by catwalks, guard rails, protective covers and signboards, and is essential. Water leaks into the tunnel accumulate in the transfer area if it is located aft. Care must be taken to ensure that the tunnel bilge levels do not rise, and must be attended to. The trash pump bilge wells are also located beneath the transfer area at the aft of the end vessels. These wells are fitted with water level alarms, which must be regularly tested to prove that they are operational.

The size and design of the boom or hopper depends upon the width and carrying capacity of the belts they serve, as they regulate and spread the cargo over the belt they feed. The belt carriage sides may also be fitted with skirtboards for further regulation of cargo. These bins or hoppers are lined witabrasion resistant liners to protect the mild steel construction, and hardened-impact plates on the side of direction of the cargo flow.

They may also be provided within their structure, with an adjustable plate to fine tune the cargo regulation, and avoid spillage. These bins or hoppers must be regularly inspected, for wear of their abrasive lining, and impact plates, and also that there are no other blockages e.g. previous cargo build-up, some fallen object, or any sharp object which would tend to tear the belt. During the discharging operation, inspections using a torch through the viewing-ports provided, are to be carried out.