Ships of the general bulk carrier form have experienced a relatively high disaster during the late 1980s and early 1990s giving rise to concern as to their design and construction. Throughout the 1990s bulk carrier safety has received considerable attention in the work of IMO, the classification societies and elsewhere.

Based on experience of accidents with lesser consequences it was concluded that the casualties occurred through local structural failure leading to loss of watertight integrity of the side shell followed by progressive flooding through damaged bulkheads. The flooding resulting either in excessive hull bending stresses or excessive trim, and loss of the ship. 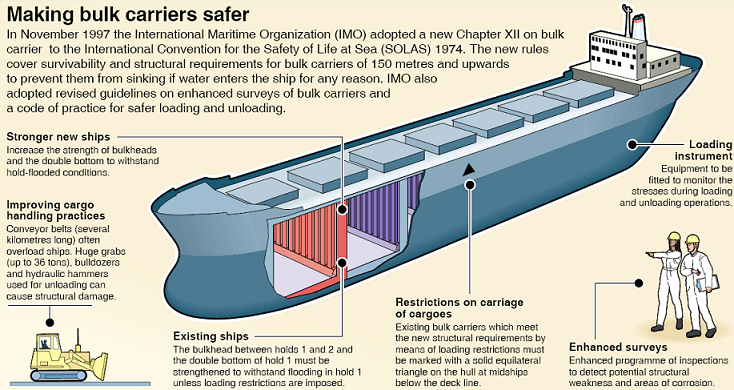 Much of this work has concentrated on the structural hull details, stresses experienced as the result of loading and discharging cargoes, damage to structure and protective coatings arising from discharging cargoes, poor maintenance and subsequent inadequate inspection of the ship structure.

The outcome of this work has been the introduction of a new Chapter XII of SOLAS covering bulk carrier ship safety and enhanced survey procedures for bulk carriers. The chapter highlighting strengthening of hatch covers in the forward part of the ship ,structural requirement, adequacy of bow heights provide additional security against cargo damage, damage stability guideline and other requirements. 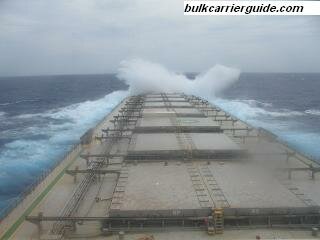 Guidance on early assessment of hull damage and possible abandonment

There have been cases in the past where ships carrying bulk cargoes have been lost due to a loss in hull integrity. This, combined with the lack of prompt action, has resulted in lives being lost. Early assessment of the situation is therefore imperative, combined with alerting a maritime rescue coordination centre, alerting all personnel onboard and making preparations for evacuation. This is of particular importance for single skin bulk carriers which may not be capable of withstanding flooding of any cargo hold.

Heavy cargoes such as iron ore or heavy break bulk cargoes, such as steel, make a ship particularly vulnerable. This is due to the relatively small volume of cargo compared to the large volume of unoccupied space that provides the potential for large volumes of water to destroy the ships buoyancy, stability or structural integrity.

Where flooding occurs, or is likely to occur, the master must rapidly assess the damage by being alert to water ingress and its consequences. Such an assessment may be carried out by the following:

If a ship takes on an unusual trim or heel, or if her motions become changed, breach of the hull envelope should be suspected immediately. Signs may include:
Methods of Detection

In the event of identifying, or even suspecting, that the ship may have sustained damage, the ships personnel should immediately be called to their emergency stations. A HIGH PRIORITY SHOULD BE PLACED ON PREPARING EQUIPMENT FOR EVACUATION. Abandonment should, however, only be invoked on the spoken orders of the Master following assessment of the risk.

Contact with a Maritime Rescue Co-ordination Centre (MRCC) and the management office should be made early if the Master has any suspicion that the ship is damaged. An URGENCY (Pan-Pan) signal is justified and this should be upgraded to DISTRESS (Mayday) if the ship is confirmed as damaged.

Masters may wish to investigate any suspected water ingress more closely but preparations for evacuating the ship should be made WITHOUT DELAY and concurrent with any investigation. Remote methods of observation are preferable to sending personnel onto decks, particularly in bad weather and / or at night. Deck floodlights should be used if necessary to try and identify abnormalities. Detrimental effects on watch keepers night vision are of secondary importance in such circumstances.

When a loss of hull integrity is known or suspected, personnel should not be sent onto decks that are being regularly submerged or deeply awash. In such circumstances the ship should be regarded as in imminent danger and priority should be given to preparations for evacuation.

Where water ingress alarms are fitted, full instructions must be posted by the alarm panel which will normally be located on the bridge. All officers are to be made aware of the alarm settings, correct operation and testing of this equipment.

Health hazards for personnel working in a dusty condition onboard