Some modern bulk carrier types are explained below:

Ore carriers are specially designed and may only be employed for a specific trade, eg carriage of iron ore in bulk from major Australian or Brazilian ports to specific ports in China or Japan. 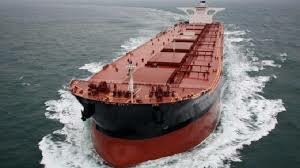 
Ships that are designated as ore carriers have to be strengthened by class standards. In a seaway these ships tend to be stiffer due to the high density of ore cargoes.

These ships were designed to alternate between dry bulk and oil cargoes, avoiding a non-earning ballast passage by carrying both cargoes in the same cargo spaces at different times.

They were designed with large hatches to facilitate loading and discharging. However, the hatch covers were designed to be `oiltight' so the same ship could be loaded with oil cargoes with strengthened holds for ore cargoes. For this dual purpose operation, OBOs were fitted with pipelines, pumps and other oil tanker equipment. Major problems on these ships included gas freeing to load dry cargo after an oil cargo and the high maintenance costs caused by heavy wear and tear. Owing to the number of losses, notably the Berg Istra (1976), Berg Vanga (1979) and the Derbyshire (1980), combined with the high maintenance costs, there has been a reduction in the number of these ships, with few new OBOs built. Most remaining OBOs are limited to one cargo type.

OBO construction is similar to that of a bulk carrier except that they have larger wing tanks and their DB tanks are deeper to improve stability when carrying ore cargoes. Many OBOs have void spaces formed by fitting transverse bulkheads between two cargo holds. Other features of OBOs are:

Similar in hull structure to other bulk carriers, these vessels are fitted with one of two systems for discharging cargo:

i) A gravity fed self-unloader: the cargo is dropped onto a conveyor belt running in a duct keel under the cargo holds that carries the cargo towards the bow or stern of the vessel where another conveyor lifts it for discharge ashore. The discharging arm is connected to a boom that can be slewed into position for discharge

Fig: Self unloader components in operation

ii) a hybrid self-unloader: commonly used, this method does not require any special structural design of the vessel. The cargo is discharged by grabs into hoppers where it feeds onto a conveyor belt. The hoppers can be permanently fitted on the ship or may be placed on the deck of the vessel when discharging.

These ships can discharge cargo in ports without any unloading facilities. The discharging rates achieved can be the same or higher than those of similar shore based facilities. An added advantage is that a totally enclosed conveyor system can discharge cargoes such as cement, coal, grain, ores and fertilisers without causing problems such as dust, cargo wastage, or damage to the ship's structure by grabs or weather effects.

While the initial cost may be high and the ship's carrying capacity is reduced by fitting an unloader, this is offset by the quick turn around and reduced port stay.

These vessels do not have upper and lower wing tanks . Instead, they have straight sides to carry square shaped bundles of forestry products such as unitised wood pulp, rolled paper or packaged timber cargoes. They can even carry twenty foot containers. They may have fixed or travelling gantry cranes for loading/unloading. Due to the nature of their cargoes, these vessels may be fitted with:

Open Hatch Bulk Carriers (OHBCs) can also be regarded as a forest product carrier. These carriers are required to transport and handle a variety of cargoes, including packaged sawn timber, logs (bundled or loose), and refined products such as pulp, paper and boards. The cranes must therefore be suitable for working with special attachments like clamps, multi-lifts and frames.

- Mini Bulk Carrier ,'Handysize','Handymax', 'Panamax",Capesize' , Suezmax,Very Large Bulk Carrier ,Seawaymax ,Malaccamax ,Setouchmax ,Dunkirkmax ,Kamsarmax ,Newcastlemax etc.
Bulk carriers come in all sizes, from the smallest ships of only a few hundred tons deadweight to the largest of over 360,000 tons, 340 metres or more in length, 63 metres in beam and with draughts of 23 metres.....