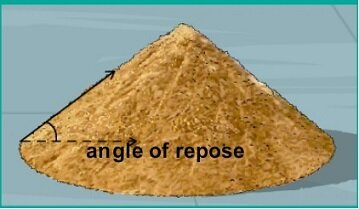 Carrying Grain :One of the most difficult and dangerous cargoes to carry in bulk are grain cargoes. Most grains have an angle of repose (slip angle) of about 20° from the horizontal, which means that if the ship rolls more than 20° the cargo will shift. Then this happens the ship will develop a large list, lying on her side and still rolling will obviously cause a greater shift of cargo which in turn will capsize the vessel.

Most authorities therefore request that the master proves that his ship is capable of remaining stable even if the grain cargo shifts. This is done by the compiling of the Grain Loading Form which fully outlines the ships stability at the worse condition on passage.
Because grain cargoes are liable to shift, heavy emphasis is placed on the stability of ships that carry them. The main reason is the variation in the types of grain, including its size and its ability to develop a free flow state when loaded in bulk. 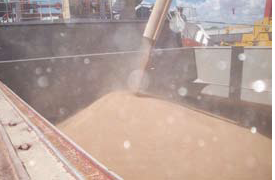 Each ship carrying grain has to provide grain specific stability information, including grain heeling moments, to the terminal. This section looks at various problems, methods and precautions that must be taken when carrying grain cargoes. Grain cargoes carried in bags are not considered as bulk cargo.

The bulk carriers' grain loading manual contains Volumetric Heeling Moments (VHM), which are values based on an assumed surface grain shift of 15° (for a full compartment) and 25° (for a partially full compartment).

1. To avoid shifting of cargo, the grain surfaces must be reasonably trimmed:
a) Filled compartment, trimmed ­ the cargo should be trimmed so that all spaces under deck and hatch covers are filled to the fullest extent possible.

3. If the cargo is stowed in the upper compartment above a tween deck whose covers are not grain- tight, the covers should be made grain-tight using sealing tape, tarpaulins or separation cloths.

4. In partly filled compartments, the surface of bulk grain should be secured by over-stowing except in cases where heeling moments due to grain shift have been calculated and taken into consideration for stability of the vessel.

a. Is made grain-tight.
b. Is constructed according to the Grain Code standards.
c. Extends from deck to deck in tweendecks.
d. Extends downwards from the underside of the hatch covers.

6. The Master shall ensure that the ship:

a. Before loading, can comply with intact stability criteria at all stages of the voyage.
b. Is upright before proceeding to sea.
c. Has all the paperwork completed and onboard.

Charterers and shippers may require the cargo to be fumigated. If this is to be done during the voyage or before or after loading, full and clear instructions should be received from the charterers and shippers. These instructions should refer to product data sheets and the correct procedures and safety advice, application dangers, method of handling, and requirements for personal protective equipment and monitoring equipment. Refer to IMO Recommendations on the Safe Use of Pesticides on Ships. Always carry out a risk assessment.

A qualified fumigator should be engaged by the charterers when fumigation is to be done in port.

All spaces should be padlocked and sealed to prevent anyone from entering the space. No-one should enter a space that has been fumigated until after it has been thoroughly ventilated. It is recommended that an expert chemist declares whether the space is safe to enter. If the cargo requires ventilation after fumigation, advice should be sought from fumigation experts in respect to crew safety. 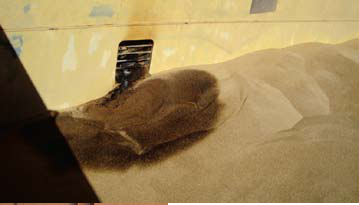 Failed pipes onboard ship carrying grain often cause, or contribute to, many serious claims. Bagged grain on a small bulk carrier was damaged after water escaped from an air pipe running between a ballast tank and the cargo hold. The pipe had a corrosion crack where it connected to the tank top and water escaped through the crack when the ballast tank was overfilled. The ship was 20 years old, but nothing had ever been done to protect the pipe from corrosion; not even a lick of paint. Cost  $220,000. Repairs to the pipe would have cost less than $150.

Some grade of grain cargos are carried in a damp condition and may cause spontaneous combustion to occur. The centre of these cargos will have very little ventilation to allow for cooling effect, therefore the natural heat generated can build up to such a degree that combustion takes place. Due to the restriction of oxygen, the cargo will only smolder until part of the cargo is removed, then admitting additional air will cause the cargo to burst into flames.

The only possible way to obtain an early warning of the start of spontaneous combustion is by monitoring the temperature of the cargo holds. Many ships are fitted with `temperature ports', ie pipes that are fitted beside the cargo hold access ladders into which thermometers can be lowered to obtain the hold temperature. The best practice is to leave the thermometers within the ports and withdraw them when a reading is desired. However, if the ship is not fitted with temperature ports, the sounding pipes could also be used to obtain temperatures. Whichever method is used for measuring temperature:
Modern bulk carriers may be fitted with permanent temperature sensors providing continuous readings. It is important to maintain records of all temperature observations and ensure readings are taken at the same times and at regular intervals. This makes it easy to establish a pattern for any irregularities in the observed behaviour.