The double bottom, cross deck and transverse bulkhead structures are designed for specific cargo loads and sailing draught conditions. These structural configurations are sensitive to the net vertical load acting on the ship's double bottom. The net vertical load is the difference between the vertical downward weight of the cargo and water ballast in the double bottom and the hopper ballast tanks in way of the cargo hold and the upward buoyancy force which is dependent on the ship's draught.

Overloading of the cargo hold in association with insufficient draught will result in an excessive net vertical load on the double bottom which may distort the overall structural configuration in way of the hold .

The important trend to note from the local loading diagram is that there is a reduction in the cargo carrying capacity of a hold with a reduction in the mean draught. To exceed these limits will impose high stresses in the ship's structure in way of the over-loaded cargo hold. There are two sets of local loading criteria depending upon the cargo load distribution namely, individual hold loading or two adjacent hold loading.

The allowable cargo loads for each hold or combined cargo loads in two adjacent holds are usually provided in association with empty double bottom and hopper wing ballast tanks directly in way of the cargo hold. When water ballast is carried in the double bottom and hopper wing tanks, the maximum allowable cargo weight should be obtained by deducting the weight of water ballast being carried in the tanks in way of the cargo hold. 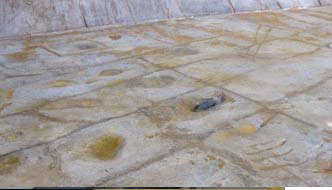 Fig: Check the tank top indents after discharge and after cleaning

Structural Damage due to High Density Cargoes
High density cargoes have a greater weight than their volume may imply. Lighter cargoes occupy more space. For example, the stowage factor for corn is 1.42 m3/tonne while for iron ore, the stowage factor can be as small as 0.24 m3/tonne. Tanktop strength is provided in the ship's stability booklet . However, as a ship ages, this strength reduces and a greater safety margin is recommended for older ships.

According to the IMSBC Code, any cargo with a Stowage Factor less than 0.56 m3/tonne is considered a high density cargo. There are three recommended ways by which maximum tonnage allowed in any cargo hold (not just bulk carriers) can be calculated if no other information is provided in the ship's documentation. These are:

ii. If the cargo is untrimmed or partially trimmed, then:
Maximum height of cargo pile = 1.1 × D × Stowage Factor
Where Stowage Factor is given in m3/tonne.

iii. If the cargo is trimmed level, then 20% more cargo may be loaded (as calculated in [i] above) in the lower hold.

The cargo officer should calculate the maximum permissible tonnage for each cargo hold. This is found in the ship's stability book, but can be calculated by the formula:

(Note: the above formula may only be used for homogeneous bulk cargoes and not cargoes such as steel coils.)

Another peculiar characteristic of high density cargoes is that they do not provide much support to the internal structure of the cargo hold, which may increase the risk of damage from panting stresses. This is particularly true with ships where the maximum safe load for cargo holds is either not given or is not considered when loading such cargoes.

Panting is a term used to describe the movement of the ship caused by the shock of contact with a succession of waves at the bow or the stern. It can be thought of as breathing-like movement in the fore and aft plane of the vessel. 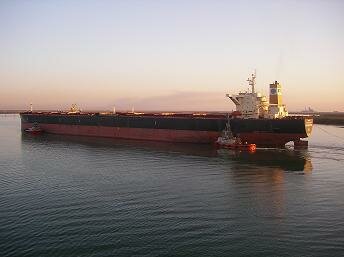 The International Association of Classification Societies (IACS) estimates that an extra 10% load on a vessel's structure increases the still water bending moments by 40% and shearing forces by 20%. These small variations in loads can easily be caused by inappropriate and/or careless loading/discharging. For example, in the loading port, if the rate of discharge of ballast water is not similar to the rate of cargo being loaded then stresses are likely to cause severe damage to the ship's structure.

It is the job of the ship's officers to ensure that this does not happen and the procedure should be established in the cargo plans. If it is suspected that a vessel has been overloaded, tank top and deck structures (particularly deck plates between hatchways and at hatch corners) should be carefully inspected for any signs of cracking or buckling.