Causes of bulk carrier hull damage and failure in operation

Damage to side shell, externally through contact with docksides or tugs and, internally from impact by cargo dislodging equipment during discharge, can result in initiating fractures and/or fatigue of the structure. In single side-skin bulk carriers, bulkheads, trunks and ballast tank boundaries, can present "hard spots" that concentrate forces where the change in construction occurs (e.g. longitudinal to transverse framing). This may lead to undetected fractures.

Internal degradation through corrosion may be accelerated through chemical action from certain cargoes. Welds in particular may be subject to "grooving" corrosion, in which the material forming the weld corrodes at a faster rate than the plating to which it is attached. Fatigue failure may result due to loss of cross-sectional area in the plating joints.

A ship loaded a full cargo of aluminium hydroxide in Australia for discharge in the USA. The ship was equipped with box holds, which allowed for easier cleaning and inspection before loading. At the discharge port, at the same time as the ship was being unloaded, seawater ballast was being taken onboard. It was later found during the discharge that 500 tonnes of the cargo was water damaged by the ballast, which was confirmed to come from a hole measuring 100mm x 20mm in the hold/ballast tank steel plating. The hole was most likely to have been caused by stevedore grab damage in the discharge port.

In ballast holds, sloshing forces due to partially filled spaces (such as may occur when changing ballast for environmental reasons) may result in damage to the structure. This damage may go unnoticed if it is in inaccessible positions. Sloshing is also a known cause of secondary damage after a space has become flooded. 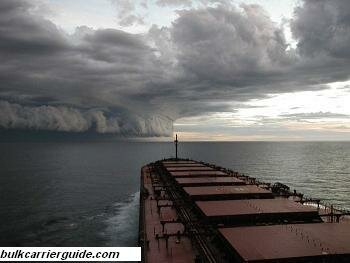 Damage to bow plating such as is possible through impacts associated with swinging or loosely stowed anchors may cause an initiating fracture or fatigue in bow shell plating that could lead to failure and subsequent flooding. Internal integrity of forward spaces (that are usually used for ballast and/or stores) is therefore of vital importance. Corrosion degradation will seriously reduce the ability of plating and stiffening to withstand the forces to which it will be subjected. In larger ships, partially filled forepeak tanks may set up destructive sloshing forces unless the tank structure is designed for this.

External forces ­ horizontal and/or vertical - may cause hatch cover dislodgement. The cargo hatchway, if it loses its protection in this way, is a major access for water ingress and a serious threat to the integrity of the hull.

When a vessel requires repairs to damaged equipment or to the hull it is necessary for the work to be carried out to the satisfaction of the classification society surveyors. In order that the ship maintains its class, approval of the repairs undertaken must be obtained from the surveyors either at the time of the repair or at the earliest opportunity.


The main engine of a bulk carrier was seriously damaged when alumina in the cargo hold got into its fuel tank. There was a hole in the air pipe that passed through the cargo hold into the tank. Cost  $850,000. The pipe had never been properly examined during surveys.

Use of damage control book

The Damage Control Book includes tables and drawings showing the locations of:

i) Watertight and fumetight doors, hatches and scuttles.


What is a draft diagram ?

The draft diagram in the Damage Control Book is a nomograph for determining the displacement from observed drafts. There are several forms of draft diagrams. In the simplest form, drafts are plotted on vertical scales at the forward and after draft marks, and displacement is plotted along a line describing the position of the center of flotation relative to the draft marks at any draft. Additional scales can be added to show other hydrostatic functions.