Terminology Used in the Carriage of Grain in Bulk Carrier

Part A of the IGC lays down specific requirements relating to stability information, stability requirements, the stowage of bulk grain, grain fittings, divisions (i.e. shifting boards) and their associated equipment together with strict regulations if a saucer, bundling, overstowing, strapping or lashing, or wire mesh are being used as a means to eliminate heeling moments in a partially filled compartment.

The satisfactory loading, carriage and delivery of grain requires constant attention from ships' staff with consequent knowledge of the above regulations and the characteristics of the particular cargo loaded.

The following definitions are from the IMO International Grain Code

The term grain covers wheat, maize (corn), oats, rye, barley, rice, pulses, seeds and processed forms thereof, whose behaviour is similar to that of grain in its natural state.

The term filled compartment, trimmed, refers to any cargo space in which, after loading and trimming as required under A 10.2, the bulk grain is at its highest possible level.

The term partly filled compartment refers to any cargo space wherein the bulk grain is not loaded in the manner prescribed in A 2.2 or A 2.3.

The term angle of flooding (1) means the angle of heel at which openings in the hull, superstructures or deckhouses, which cannot be closed weathertight, immerse. In applying this definition, small openings through which progressive flooding cannot take place need not be considered as open. 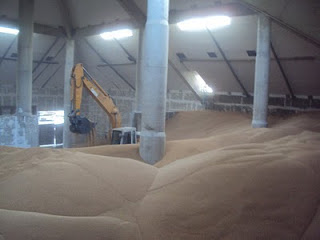 
The term stowage factor, for the purposes of calculating the grain heeling moment caused by a shift of grain, means the volume per unit weight of the cargo as attested by the loading facility, i.e. no allowance shall be made for lost space when the cargo space is nominally filled.

The term specially suitable compartment refers to a cargo space which is constructed with at least two vertical or sloping, longitudinal, grain- tight divisions which are coincident with the hatch side girders or are so positioned as to limit the effect of any transverse shift of grain. If sloping, the divisions shall have an inclination of not less than 30° to the horizontal.

The Document of Authorisation certifies that a ship is capable of loading grain in accordance with the requirements of the International Grain Code.

Safety precautions for loading and carriage of iron ores