Grains such as wheat, rye, maize, rice, oats, seeds and their processed forms have been commonly transported by ships. Grains have a tendency to settle and shift within a ship's cargo compartments.

A compartment may be full when the cargo is loaded but, due to ship's vibration and other movements, the grain settles leaving space at the top of the cargo. This space allows cargo to move from side to side in conjunction with the rolling and pitching of the vessel. 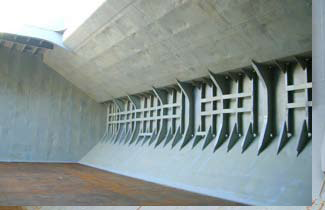 Fig: Hold of a bulk carrier that is grain clean and ready to load

As the cargo shifts the vessel lists to one side. The International Grain Code was written at a time when grain was predominantly carried onboard general cargo vessels, employing methods including saucering, bundling and strapping. However, modern bulk carriers are designed and constructed taking the problems of carrying grain into consideration. The BLU Code refers to loading and discharging operations and develops an understanding of procedures.

SOLAS regulation VI/9.1 (Requirements for cargo ships carrying grain) provides that a cargo ship carrying grain must hold a Document of Authorization as required by the International Grain Code, and for the purposes of regulation 9, the requirements of the Code should be treated as mandatory. A ship without a Document of Authorization must not load grain until the master satisfies the flag State Administration, or the SOLAS Contracting Government of the port of loading on behalf of the Administration, that the ship will comply with the requirements of the International Grain Code in its proposed loaded condition (regulation 9.2).

The International Code for the Safe Carriage of Grain in Bulk is commonly called the International Grain Code was adopted by the IMO Maritime Safety Committee by resolution MSC.23(59). It applies to ships regardless of size, including those of less than 500gt, engaged in the carriage of grain in bulk, to which part C of chapter VI of the 1974 SOLAS Convention, as amended, applies (A 1.1).


Grain Code defines grain as including wheat, maize (corn), oats, rye, barley, rice, pulses, seeds and processed forms thereof, whose behaviour is similar to that of grain in its natural state .

A Document of Authorization must be issued by or on behalf of the flag State Administration for every ship loaded in accordance with the Code, and must be accepted as evidence that the ship is capable of complying with the Code (A 3.1).

The Document of Authorization, grain loading stability data and associated plans may be in the official language or languages of the issuing country. If the language used is neither English nor French, the text must include a translation into either English or French.

A copy of the Document of Authorization, grain loading stability data and associated plans must be placed on board so that the master, if required, may produce them for inspection by the SOLAS Contracting Government at the loading port (A 3.4).

The flag State Administration, or a SOLAS Contracting Government on its behalf, may exempt individual ships or classes of ship from particular requirements of the Code if it considers that the sheltered nature and conditions of the voyage are such as to render their application unreasonable or unnecessary.

Information in printed booklet form (i.e. a Grain Loading Manual) must be provided to enable the master to ensure that the ship complies with the Code when carrying grain in bulk on an international voyage (A 6.1). Information to be in the booklet is listed in A 6.2 and A 6.3. The information in A 6.2 must be acceptable to the flag State Administration (or a Contracting Government on its behalf), while the information in A 6.3 must be approved by that body.

A ship not having on board a Document of Authorisation issued in accordance with A 3 of the Code may be permitted to load bulk grain subject to certain conditions, one of which is that the total weight of the bulk grain does not exceed one third of the ships deadweight (A 9.1).