Bulk carriers have one of the highest loss rates of the world merchant fleet. During the period 1990-95 the average age of bulk carriers lost through leaks or disappearance was 18 years (Anon, 1996). This indicates that age related vessel damage has a significant contribution to bulk carrier losses. The findings of several research programs support this view by identifying both corrosion and fatigue as weakening the structures of bulk carriers .

The problem of corrosion is generally dealt with in three stages throughout the life of a vessel. Firstly, appropriate corrosion prevention methods are incorporated into the initial design of a vessel. These include the use of cathodic protection systems and various types of protective paint coatings. The condition of the hull structure is then monitored at special and intermediate hull surveys. Finally, areas with excessive coating breakdown and/or wastage are then replaced or repaired.

The International Association of Classification Societies (IACS) implemented the enhanced survey scheme in 1993. This has led to significant improvements in corrosion and coating monitoring and recording of data. The implementation of initial corrosion protection systems has also improved in recent years since the unified requirements for corrosion protection of ballast tanks and cargo holds of bulk carriers were introduced by IACS in the early 1990s.

Despite the increased significance given to corrosion prevention and detection, decisions still have to be made concerning when to replace plating and upgrade coating or anodes. If plate thickness or coating condition is below the level required by class rules then upgrade is required.

The electrochemical corrosion reaction consists of two partial reactions; the anodic oxidation reaction (loss of electrons) and the cathodic reaction where the electrons are reduced by an electron acceptor (usually oxygen). Corrosion will only occur at locations where there is sufficient oxygen and moisture. As the corrosion reaction is a form of chemical reaction, the rate is dependent on temperature.

Temperature, oxygen and moisture supply are all relevant to bulk carrier corrosion and vary with operation and location within the vessel.

The following discussion identifies the main characteristics of corrosion for the primary members in the cargo hold region. These are related to the operating factors influencing the corrosion processes.

A protective coating is not used and a protective corrosion product layer is not formed due to wear from cargo grabs and bulldozers. Corrosion proceeds in the presence of moisture when loaded with coal and iron ore and when unloaded if the local relative humidity is greater than approximately 70%. Rates of corrosion are also dependent on the type of coal loaded.

A protective coating is not used, however a corrosion product layer does develop on the lower stools. Xray diffraction analysis of sample corrosion products has revealed the presence of chlorides and sulphates, leached from the coal. Magnetite has also been detected, indicating that corrosion proceeds as a nonlinear function of the time of wetness (TOW). The TOW will be similar to the tank top plating. The corrosion rate can also vary depending on the type of coal in the cargo hold.

On the other hand the TOW for corrosion is dependent on the number of voyages with coal and how often the local relative humidity is greater than approximately 70% (a function of weather conditions) when unloaded or carrying iron ore. The quantity of moisture varies depending on the degree of sideshell sweating. Sideshell sweating is a function of coal and seawater temperature. 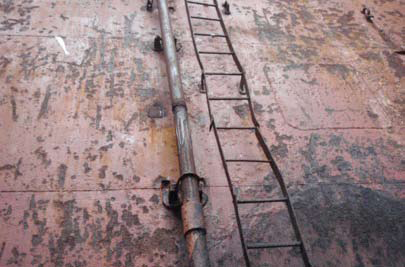 Fig: These holds are unlikely to pass a grain survey, as they are heavily pitted with rust scale and embedded with coal staining

These areas are fully coated and do not have contact with iron ore cargo. The TOW is similar to that for the transverse frames except the critical relative humidity is likely to be lower than 70% due to the presence of coal dust. The hygroscopic nature of coal dust allows an adsorbed layer of water to form at a lower vapour pressure.

By IACS rules it is compulsory for the DBBT to be coated. Cathodic protection is also utilised by some operators but is only effective when the tank is ballasted. Coating breakdown occurs on the underside of the tank top plating due to plate deformation caused by grab damage.

The frequency of cargo discharge is therefore a significant operational parameter. After coating breakdown, corrosion proceeds when the tank is unballasted due to the ineffective cathodic protection and high humidity. Deterioration of coating and consumption of anodes is dependent on the time in ballast and the salinity and temperature of the ballast seawater.

This area is a fully coated void space. Similarly to the DBBT, coating breakdown occurs on the underside of the tank top plating. The incidence of coating breakdown is therefore dependent on the frequency of cargo changes. Areas of exposed plating increase with time as the coating debonds from the surface due to differential aeration corrosion around the perimeter of the exposed area. As the duct keel is a void space, corrosion will only proceed when there is moisture present, that is, when the local relative humidity increases above approximately 70%. Corrosion is expected to be approximately linear with respect to the TOW because of the powdery composition of the rust which offers minimal protection and is common on downwards facing surfaces.

Protective coatings and usually cathodic protection is used to prevent corrosion in the topside tanks. As with the DBBT, the deterioration of coating and consumption of anodes is dependent on the time in ballast and the salinity and temperature of the ballast seawater. Additionally the coating on the underdeck longitudinal stiffeners is prone to premature failure, possibly because of increased temperature due to deck heating.

The most obvious operational parameter affecting cargo hold corrosion is the relative frequency of transporting coal or iron ore cargoes. Coal is more corrosive than iron ore due to the presence of sulphates and chlorides and its ability to produce an acidic leachate. Furthermore, the TOW and wear of protective coatings varies for different locations within the vessel, depending on which cargo is loaded. Several of the factors contributing to corrosion are dependent on the local environmental conditions the ship encounters.

In summary, it is considered that a corrosion prediction model for bulk carriers should account for the following factors; relative incidence of coal and iron ore cargoes, frequency of cargo loading and ballasting, ballast ratios and expected trading routes.

Coal is considered to be corrosive to cargo hold surfaces due to its ability to produce an acidic leachate as a result of sideshell sweating (e.g. Jubb, 1995; Coll, 1996). It is desirable to know if the corrosivity of coal is highly variable. If this is true then, in addition to the operating variables identified, it will account for the highly variable corrosion rates reported in the literature for bulk carriers.

To investigate the variability of coal corrosivity it is helpful to consider the fundamentals of why coal is corrosive.

Corrosion proceeds in the presence of moisture and a cathodic reducer, typically oxygen. The inherent moisture in black coals is usually 1-2wt% whilst export contracts specify total coal moisture levels of 7- 10wt%. The 5-9wt% free moisture is adequate to allow corrosion reactions to proceed. The oxygen content within loaded coal is approximately 20.5%, which is similar to open air. Therefore bulk coal will corrode mild steel.

It is proposed that the variability of coal corrosivity is due to;

(a) the supply of free moisture that contains impurities leached from the coal, such as chlorides, sulphates and low pH.
(b) the contact of coal particles at discrete points on the surface causing galvanic and differential aeration effects.

The most significant impurities in coal are chlorine and pyritic sulphur which provide sources for Cl- and SO4 2- ions respectively. Corrosion is also dependent on the pH of the electrolyte. Corrosion Due to Coal Particle Contact To the authors knowledge, the mechanism of particle contact corrosion (due to bulk cargoes) has not been investigated for ship structures. For coal cargo it is suggested that the rate of steel corrosion at points of contact with coal particles is altered due to two effects; (a) the formation of a galvanic couple between the coal and the mild steel. (b) the presence of a local differential aeration cell at each contact point.

Coal comprises 50-65% carbon. The reversible potential of carbon is 2.10V compared to -0.44V for mild steel. It is therefore feasible that a galvanic cell will exist.

This is supported by a study of the corrosivity of steelmaking process materials (Barr, 1997). Under identical conditions, mild steel covered with coke corroded at least twice as fast as for other materials such as iron ore, sinter and limestone. This was attributed to a galvanic effect. Analysis of each leachate showed that coke leachate did not have a significantly higher chloride or sulphate concentration.

The corrosivity of coal cargo is highly variable. The supply of chlorine and pyritic sulphur, and leachate acidity contribute to the variability. Bulk carrier corrosion rates are therefore highly variable due to the carriage of different types of coals, in addition to the previously mentioned operating variables.

Age related vessel damage, and hence corrosion, has a significant contribution to bulk carrier losses. Statistical analysis of survey data has revealed that bulk carrier corrosion rates are highly variable. The relative incidence of coal and iron ore cargoes, frequency of cargo loading and ballasting, expected trade routes, ballast ratios and type of coal transported are the main factors contributing to the variability of corrosion rates of bulk carriers.


Our detail pages illustrated many safety aspects of Bulk carrier