Many cargo claims arise due to ship's sweat which may occur when external temperatures result in internal metal surfaces of a hold becoming cooled to a temperature below, the so-called dew point of the atmosphere in association with a cargo within a hold.

The sole ralation behind ventilating any of the types of cargo under consideration, is in fact to prevent or minimise ship's sweat formation, when conditions are conducive to the occurrence of this phenomenon, and possible associated cargo damage.

However, the extent of potential ship's sweat formation and whether this will be sufficient to drip back onto a cargo depends on the amount of available moisture in the atmosphere within a hold, which in turn is related to the amount of moisture in the cargo being carried. Hence, decisions on if it is necessary to ventilate, depends on consideration of the specific nature of the cargo being carried. 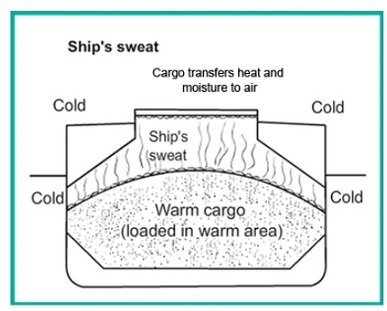 
Risk of ship sweat : Considering the type of cargo

In general, therefore, it will be apparent that the risk of ship's sweat formation exists only when cargoes which have been loaded in comparatively warm conditions are being carried through regions where external temperatures are cooler.

If ventilation is not, or cannot then be applied, the extent of the ship's sweat formation will be dependent on the extent to which internal hold structures become cooled below the dew point of the atmosphere within the hold, the time period over which such circumstances prevail and, importantly, the amount of moisture available within the hold, which, as already mentioned, depends on the type of cargo being carried.

For a hold loaded exclusively with cargoes containing no inherent moisture the only moisture available for condensation as ship's sweat will be the comparatively minute amount in the small mass of the volume of air within the hold. It is therefore highly unlikely that ship's sweat formation sufficient to drip back onto a cargo will ever occur under any voyage circumstances; the safest option for these types of cargoes is not to ventilate.

Cargoes in the high moisture content category are usually hygroscopic - that is they can absorb or release moisture into their immediate surrounding atmosphere depending on the moisture content of the cargo and the concentration of moisture in the immediate surrounding atmosphere. Thus, the relative humidity and also the temperature of the atmosphere in a hold containing these cargoes is principally controlled by the moisture content and temperature of the cargo as loaded. (A proviso here is that these latter parameters are numerically suitably low for the cargo to be inherently stable, hence precluding the possibility of any significant self-heating in transit due to microbiological activity).

It will be appreciated that the substantial amounts of inherent moisture even in stable cargoes of this type provide an enormous "reservoir" of moisture for potential release into the associated atmosphere within a ship's hold. This applies to a much lesser extent to cargoes in the low moisture category where the risk of any substantial ship's sweat formation is therefore correspondingly much lower. Usually, however, the same principles of ventilation apply to cargoes in the high and low moisture categories, although in the latter category there can be some exceptions.

These include some organic and inorganic fertilisers in bulk or in permeable packaging where, for special reasons which are outside the scope of discussion in this article, the normal criteria of ventilation may not apply and it may be appropriate to seek specialist advice.


Minimising the risk of ships sweat

Apart from such exceptions, the underlying logic of the desirability of ventilating cargoes in the high and low moisture content categories only when external temperatures are lower than the temperature of the cargo, in order to minimise ship's sweat formation, is perhaps most easily understood by considering some of the basic physical parameters involved. In this respect it is important to bear in mind the point referred to earlier that the higher the temperature of a given volume of air, the greater is the maximum amount of water vapour which it can hold.

Furthermore, because the cooler air entering the hold will be warmed during its passage through the hold by the warmer cargo, its relative humidity will be decreased and it will have the capacity to absorb moisture from the cargo - thus, the same beneficial effect of net removal of moisture will be achieved by repetition of the basic cycle of displacement of this air by the cooler outside air of comparatively lower moisture content.

It is, however, difficult to accurately measure dew points within the loaded holds. A more practicable and satisfactory rule of thumb if the average temperature of a cargo can be determined during loading is to apply ventilation during a voyage only if and when external air temperatures are 3°C or more below the loaded temperature of the cargo. This can be safely applied to all hygroscopic cargoes in the low moisture category (including some packaged low and zero-moisture content cargoes where it is essentially only the hygroscopic packaging which naturally contains any releasable moisture), when such cargoes are stowed singly in a particular hold.

However, different rules may be applicable when, for example, mixed hygroscopic and non-hygroscopic cargoes are stowed in the same hold - appropriate recommendations concerning ventilation may then vary according to specific circumstances.

Requirement of bilge monitoring at sea

Preventive measures against cargo which may liquefy


Our detail pages illustrated many safety aspects of Bulk carrier