Before loading a bulk cargo, the master has usually to declare that the ship is ready to load as per the charterparty requirements and charterers and owners instructions. Copies of the charterparty should be placed onboard so that the master is able to see exactly what are the ships obligations. The master can have this declaration accepted only when the holds have been inspected and accepted.

For this to happen, the master needs to know how clean the holds have to be to meet the charterers requirements. This will depend on the previous cargo, the next cargo, local regulations and specific cargo interest requirements. 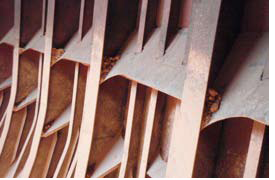 Fig: Residue of previous ore cargo caught in the frames

Whatever the previous cargo, all holds should be swept clean, and loose scale and rust removed. When reloading the same cargo commodity, there is a tendency to leave the holds unswept. In general terms, this is not good practice since the residual cargo can hide damage to the hold or tank top. Traces of previous cargoes, such as sulphur, sulphur traces in coal cargoes and some fertiliser cargoes may corrode bare steel plate.

It is recommended that holds are swept clean after every cargo and the residues removed or, if reloading the same cargo type, placed to one side so that a tank top and hold inspection can be carried out. Large amounts of cargo remaining onboard may not only cause outturn problems, but hide damage to the tank top plate.

The level of cleanliness of the hold required will vary from port to port, and shipper to shipper. As a general rule, if nothing specific is stated, a double sweep, with a saltwater wash followed by freshwater wash, is a sensible option. In order to avoid delays or offhire of the ship, hold cleaning requires proper planning.

The Master should always bear in mind the effect of the cargo on his ship's structure. An example of this is the carriage of high sulphur content coal, which under certain circumstances can lead to the formation of sulphuric acid and very greatly accelerated wastage rates in the ship's steel work. He should also be mindful of the effect of the cargo on subsequent cargoes planned to be carried in the same space, particularly where foodstuffs are involved, which may lead to future claims based upon the ship being in an unfit condition to load.

The planned loading or discharging sequence of heavy bulk cargoes should be strictly adhered to and the Master must resist commercial or operational pressure to alter the sequence.

The holds will be declared unfit for loading if any residue of the previous cargo, other debris or substances, dunnage residue or a need for repair or hot work is found. 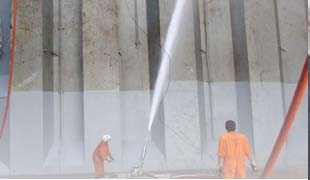 Cargo stains are not acceptable if they rub off and risk contaminating the next cargo. Surveyors give coal and petcoke stains particular attention because these can blister and peel the paint work if the hold starts to sweat.

Action: Coal and petcoke stains can be removed by using spray jet systems for applying chemicals from the tank top. The choice of chemicals must be carefully considered, as odour and caustic effects will affect the next cargo. High-pressure cleaning can be used to access small areas in the lower parts of the holds.

All areas affected by rust and flaking paint will be checked by the surveyor. The holds will be declared unfit if loose rust or paint flaking is found. 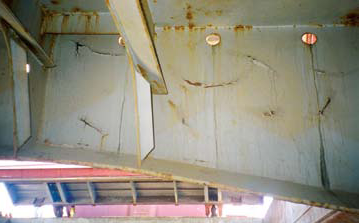 Fig: Flaking paintwork under the hatch coaming can result in a hold failing the grain survey
Action: Loose rust and paint flakes should be removed using high-pressure air or water cleaning equipment. The areas are then to be cleaned and scraped.

If a hold is found to contain animal filth, bird droppings, faeces or sewage, it will be rejected. There must be no evidence of rats or rat droppings. If this is suspected, specialist assistance and probably fumigation will be required by the local authorities who should be notified accordingly.

Action: Holds must be thoroughly checked and any unsanitary conditions treated appropriately. If any sewage is found, it must be identified and the source found. It should be stored onboard properly before being discharged ashore.

All holds must be dry. If the holds contain water or leaking water, the vessel will be declared unfit. Bilges and bilge wells must be dry.

Action: If water remains in the hold after a wash-down, it must be mopped up or air-dried. If water is leaking into the hold, steps must be taken to repair the leak. 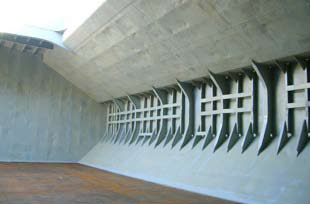 Fig: Hold of a bulk carrier that is grain clean and ready to load

All grain storage areas must be odour-free. This includes odour from paint and cleaning chemicals.

Action: Hatches must be left open, weather permitting, so fresh air can circulate, or ventilation can be used if fitted, in the affected area. Time has to be allowed to remove odours.

Holds will be declared unfit to load grain if three or more insects, dead or alive, are found in one hold. The holds will also be declared unfit if larvae or unhatched insect eggs are found. Under the Australian Quarantine Inspection Service rules, there must be no bugs: any found will result in the hold failing the cleanliness survey.

Action: Holds may need to be fumigated prior to being accepted. This can be a costly and time-consuming operation. Special attention must be given to exposed areas such as under hatch covers, hatch coamings, access ways and bottom areas of the bulkheads, slopes and tank tops.

All adjacent spaces to the holds, (for example, mast houses and storage spaces) should be inspected to ensure that they are also infestation-free.